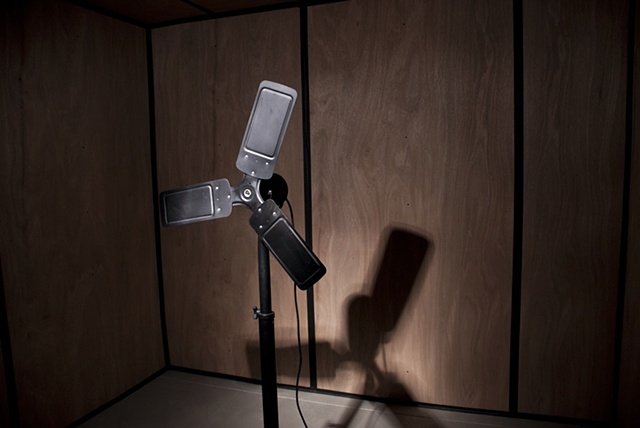 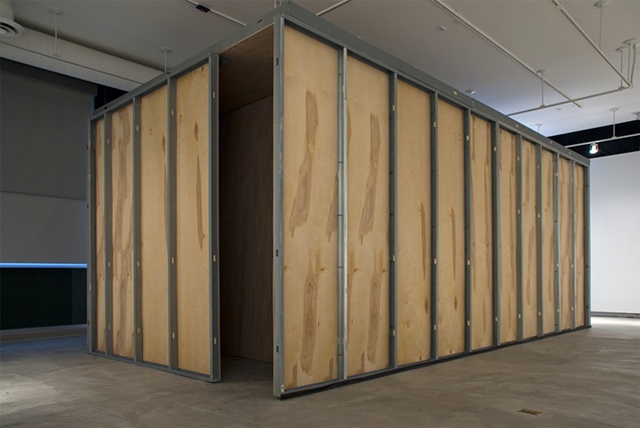 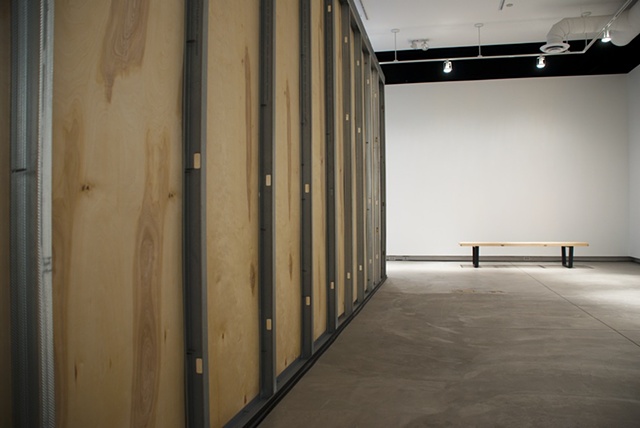 For many years I have looked at the work of artists James Turrell, Olafur Eliasson, and Anish Kapoor, which frequently challenge a viewer’s inclination to unquestioningly trust their sense of sight. The works of Eliasson and Turrell in particular often completely immerse the viewer in a controlled environment, making a person keenly aware of both the wonders and limitations of their perception. I'm also interested in the dynamic experiences and visual play created through limiting and controlling vantage points in the amusement rides at Disneyland and Disney World. It was in the midst of ruminating on these influences that the specific idea for Negative Matter emerged.

Experientially, the viewer enters a space built within the gallery environment to view a high-velocity fan that appears to be sitting completely still. In reality the motion of the fan is frozen by a type of industrial strobe light called a stroboscopic tachometer. The loud sound and air movement generated by the fan is fully perceptible, but the fan appears visually static, and unmoving. This disconnect between the ruling sense of sight, and the confirming senses of touch and sound can create a kind of numinous, confusing dread, and a visceral experience for viewers. The strobing light's frequency is beyond the human brain's ability to recognize the dark intervals and appears to be steady light (about 92Hz in this case). This frequency is well beyond the range of photo-induced epilepsy (between 20-30Hz).

The title Negative Matter is drawn from a concept used by physicists in reference to a type of mass that does not behave according to the way that we would normally expect. Negative matter would be repelled by a gravitational force, rather than drawn toward it, or accelerate in a direction opposite an applied external force, according to the Wikipedia entry on the concept. This web-based entry further clarifies: “Despite being completely inconsistent with a common-sense approach and the expected behavior of ‘normal’ matter, negative mass is completely mathematically consistent and introduces no violation of conservation of momentum or energy.”

In the installation, the viewer finds himself or herself in a situation of sensory disagreement. While vision tends to rule the senses, the viewer experiences a disconnection between their visual experience, and their tactile and aural experience. What the viewer sees cannot confirm, and in fact contradicts, what the viewer feels and hears. The nature of the situation is immediately paradoxical. In order to properly account for the phenomenon with which one is confronted, the subject is forced either to distrust their visual perception, or to distrust their aural and tactile perception.

Subtle clues exist, of course, for what is real. The installation is not intended to be a magic trick, but rather to give the viewer pause for a few moments. It is an environment that boldly defies the common practice in art of the two-second glance, and, while unapologetically leveraging the characteristics and tools of a science experiment, is intended to provoke questions not generally addressed through scientific means, such as human sensory finitude.